How are Frankfurt (Oder) and Słubice assembled across the borders culturally and infrastructurally? Cities could be explored on a number of touristic routes: following the footsteps of Heinrich Kleist – German poet, dramatist, and writer; discovering the history of Słubfurt – the twenty-years old capital of the reality construct of Nowa Amerika, which exists not only in the imagination, but in practices of community-building and spatial interventions; opening modernist architectural heritage, described and mapped by Paul Zalewski. The German-Polish tourist information office in Frankfurt provides a map of various locations on both sides across the Oder river, in both languages. This institution is located in Bolfrashaus – a recently constructed building within the assistance of the European Union’s Interreg program and yet another example of cooperation between the two cities. The same program will invest in the construction of the Kleist tower in Słubice. Collaboration in culture and tourism creates a space for economic investments. However, all these walks and interventions are limited to specific areas and exclude large parts of Słubice and Frankfurt.

Cooperation between the two cities is not only about mapping the locations, but also about activities, which give meaning to the space. Unithea festival connects both sides of the river in an intense program. A monthly guide ohneGRENZEN / bezGRANIC presents an overview of the cultural and sport events in dopplestadt/dwumiasto. Culture is aimed to overcome the boundaries, but it is often mediated through the language (or there could be an “imaginary language barrier”). Therefore, some of the events on one side of the Oder river are not accessible for people from the other. At the same time, Frankfurt and Słubice are aimed to apply to become the European Capital of Culture initiative in 2029 and open it’s unique local context to larger audiences. This would lead to more intense collaboration within the twin city.

Two cities are also linked through public transport – since December 2012 the bus line 983 runs from the railway station in Frankfurt to the bus station in Słubice. This connection is a part of Stadtverkehrsgesellschaft mbH Frankfurt Oder – you can buy a ticket there, but only pay in euro. The bus line 983 is yet another example of the dynamic of a mutually profitable asymmetry: Słubice is assembled into Frankfurt’s transportation network, and because of this fact locals and visitors of both cities can now easily travel between the two cities and countries.

All of the mentioned examples – cultural tours, movements of people, vehicles, goods, and ideas – are running on the bridge, but there is also almost invisible infrastructure under it – pipes, wires, cables, which interconnect Frankfurt and Słubice. They are the signs of institutional cooperation, and the flow of resources linked people from both sides of the Oder river on the very basic, everyday level. During the summer Słubice provides heating to Frankfurt, and during the winter it is vice versa – cities become interdependent, and their asymmetry is beneficial for both sides. Pipes and wires create a spatial and temporal working relation between people, institutions, and resources. 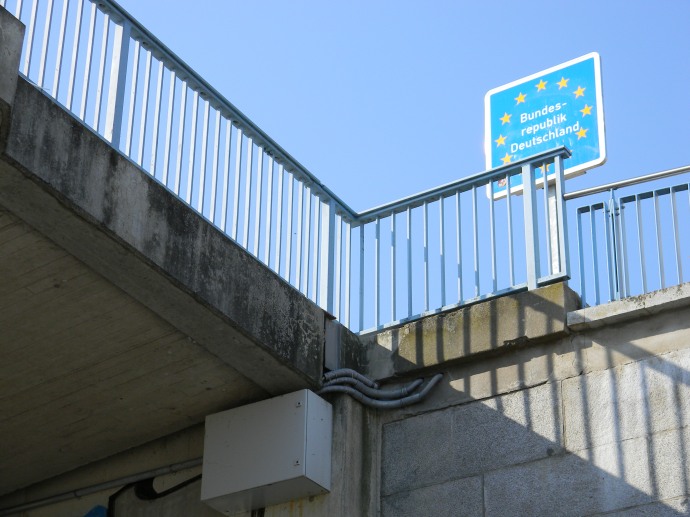 Different “software” and “hardware” infrastructures enable cooperation between Słubice and Frankfurt. They are made and maintained by specific people – and because of their investment, borders could be blurred. All together municipal entities, private companies, museums, academics, and artists contributed to a more inclusive and better connected urban environment of the twin city/ doppelstadt/dwumiasto.